It’s so much fun to get home late on a Monday night, looking forward to relaxing before bed and then remember, oh, wait, I have a recording of DWTS to watch! Okay, let’s get this mirror ball rolling.

First of all, I want to say that I think the scoring by the judges was a little bit more in line with my thinking this time, except for one. We’ll get to that one in a bit. I also want to say that Carrie Ann’s braid was really pretty and feminine. I like it.

Up first were Jodi and Keo with a Samba. I gave you last names in the first edition, we’re on a first name basis now, lol.  I thought she did great though I still feel like Jodi hasn’t broken out of her shell yet. I wish I could help pump up her self-esteem a bit.  Keo told her in rehearsal, “Don’t be desperate...and bring that energy!” He’s so supportive and seems to realize she needs a boost. I’m lovin’ me some Keo. Even the judges wanted to help Jodi. Bruno said, “Don’t doubt yourself.” He’s right. Come on, Jodi, we love you and you can do this! Go for it.  I think her scores will go up soon. Tonight’s scores... 7 - 7 - 7. A little lower than she deserved..IMHO. Still, she went first and I think that hurts because they want to keep them low at first.

2) Marla and Tony performed an Argentine Tango. Marla is just so darn pretty and graceful and elegant. She seemed a little detached to me and at least one of the judges agreed with me. Len said it lacked intimacy but was clean and polished. Carrie Ann said it was elegant and classy. Exactly. She has such good lines. I love her all natural way of life. I know some people who do all those things she was talking about. Their scores 7 - 6 - 7.

Coming back from break Dennis and Jenna were doing a cha-cha. It was so hot. Wish we could have seen the whole thing. I love watching the pros dance. After some research I have found the names of the Season 22 Troupe. Their names in this photo (which I found on BuddyTV.com) from L to R are Shannon Holtzapffel, Jenna Johnson, Kiril Kulish,  Dennis Jauch, Hayley Erbert and  Alan Bersten. 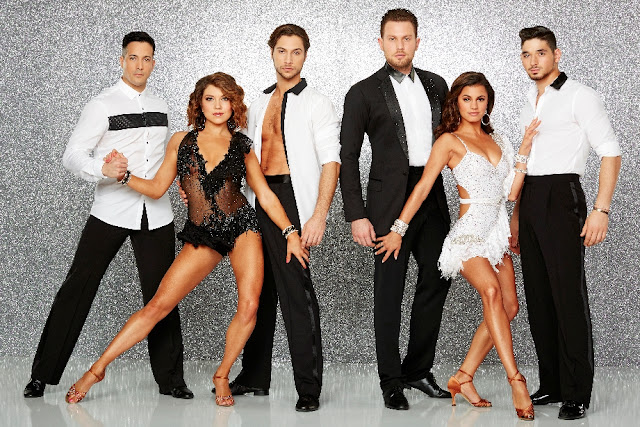 3) Geraldo and Edyta tried hard to do a Salsa. Geraldo impersonated ‘The Donald’ and they had great fun. There was a bit of improvement and Carrie Ann agrees. Len said he came out and gave it his best shot and Bruno called him a source of inspiration. Bless his heart. Scores were 5 - 4 - 4. At the end of the night Geraldo was the one to leave the show this first elimination. I think he may have been relieved, though I hate to see Edyta sidelined. It was her first time back after having a baby and I’m looking forward to seeing more of her.

4) Next, Paige and Mark, only it wasn’t Mark. Mark hurt his back just a few hours before showtime. I haven’t heard how bad the injury is yet. I hope it’s not as serious as it seemed to be. Pro troupe member Alan stepped in and learned the routine in short time. I guess that’s why they’re called “pros.” That’s hard on Paige to learn the dance with a new partner, but you couldn’t tell. She and Alan were great. Paige is a powerful presence when she’s dancing. I still think she’s one of the top. Mark’s choreography was awesome as usual. Alan was awesome too, but I hope Mark is okay and can come back, cuz I think he and Paige have a real chance. Their scores,  8 - 8 - 8.

5) Antonio and Sharna performed an intimate, sexy, Rumba. With those two beautiful bodies, how could it not be sexy? They did a great job but had points taken off for a lift. We won’t talk about the “blood flow” comment. They did better than their scores show. 6 - 6 - 7.

6)  Next up, Tootie, oh shoot, I mean Kim and Sasha.  They did a Salsa to to Conga by Gloria Estefan, a song I loooovvvveeee! If that can’t make you move, nothing can. Apparently Kim loves Gloria Estefan and so Sasha surprised her by getting Gloria on the, I don’t know... facetime? Instagram? Skype? Google Hangout? Something like that. Kim was very excited. She did a great job on her number, though she had a little mess up. Their scores, 7 - 6 - 6.

I was excited to see that Noah Galloway dropped by. The double-amputee Iraq War veteran was on Season 20 of DWTS with partner Sharna Burgess.

7) Nyle and Peta performed a Rumba. I thought it was wonderful, but Len and Bruno felt like it was too intense and too aggressive and hectic. Carrie Ann thought it was stunning and so did I. They took off points for a lift. I was surprised that one of the judges hasn’t told Nyle to keep his bum tucked.  I love what Nyle had to say. He said that first show was the most memorable experience of his life. He thought people would see him as a sympathy vote, but he’s a dancer! Yes, he sure is! Their scores 7 - 6 - 7. Too low.

In the audience they showed a quick shot of Adrianne Haslet-Davis, the ballroom dancer who lost her leg in the  Boston Marathon bombings and announced that she would be running the Boston Marathon again when it takes place in a few weeks! You go girl!

8 - Mischa and Artem with a Cha-Cha. In rehearsal she was worried and frustrated. If we can learn anything from Mischa, and we can, we see a perfect example of being your own worst enemy. Her  performance was a good try. The judges tried to encourage her. Carrie Ann told her that people’s hearts want to embrace her and lift her up, that’s why they love this show... yes, we do! Here’s what we can learn from her. I wrote down just a few of the phrases she said after her dance. “...really bad...really rough... kinda tough...” If she perked up, focused on the positive, just tried to have fun, and maybe even, be grateful that she is there because soooo many of us would love to be in her place, then I think things would go better for her. Preach over. Their scores, 5 - 5 - 5.

9) Von and Witney danced a Cha-Cha though Bruno said there wasn’t much Cha-Cha in it. Love Von. He has a great attitude. He still seems a little ...unleashed... I guess, but I think if he really applies himself and actually tries to dance a real ballroom dance, he might be great. His passing gas fines were hilarious and I’m glad they are donating the money to a charity. I enjoyed their dance. Their scores, 7 - 6 - 7.

10) Wanya’ and Lindsay did a fantastic Salsa. I loved it. He is up there at the top with Paige as far as I’m concerned. He’s already lost 15 pounds and he says he just wants to look like a dancer. Well he’s looking great! And while we’re talking about looks, come on, did you see Lindsay’s dress/costume? That girl is smokin’!!!! Their scores, 8 - 8 - 8. Tied for first with Paige!!

11) Doug and Karina with a Paso Doble. Sooooo much better. Doug came across as powerful and masculine and moved with confidence. So glad to see this. Way to go. Their scores, 7 - 6 - 7.

12) Ginger and Val rocked a Samba. If they judged just on Ginger’s legs they would have 10's. Gorgeous. They did a great job, though Ginger slipped a couple of times. I’m sure their scores would have been higher if not for that. Their scores 7 - 7 - 7.

So that wraps the night. If you missed it earlier, Geraldo was the first to exit. It was a great night and the scores were a little more in keeping with what I was thinking. We’ll see who surprises us this next week!